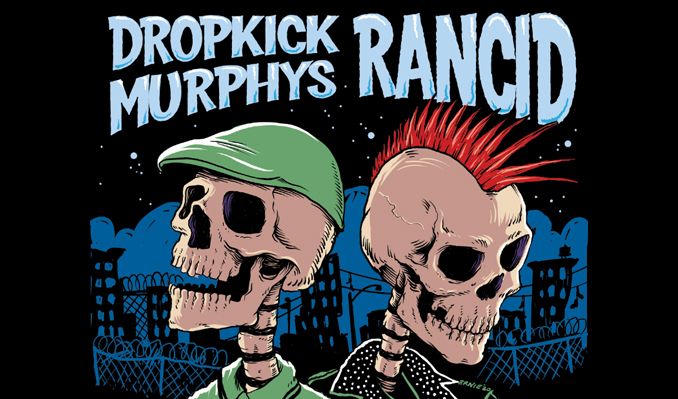 From the early days at the Boston landmark The Rathskeller (aka The Rat) beneath Kenmore Square, to 80,000-plus on the main stages of European festivals, the Dropkick Murphys have spent a large chunk of the last 20 years touring the world. All that travel has only strengthened their love and appreciation for their hometown. When they finally get back home from a tour, it's hard to pry them away again. When the band is off the road, they spend most of their time with family, or working with The Claddagh Fund, the charity foundation they launched in 2009.

You heard that right! They packed up their gear and hit the road, joining longtime producer Ted Hutt at a studio 30 miles east of El Paso. Sonic Ranch Studios, whose property abuts the U.S./Mexico border, is a place where the only cell service is the occasional bar that pops up from a Mexican carrier. This bold move, this dedication, this desolation – and this amazing studio – helped the band capture something magical on their new album, 11 Short Stories Of Pain & Glory.

“To me, the whole journey starts with the fact we actually agreed to go – and then went – to Texas. Because we’ve never left home to make a record,” says bassist and founder Ken Casey. “As everyone’s lives have become crazier and busier with kids and families, it’s gotten harder to buckle down at home. We decided to leave Boston, go down to literally the middle of nowhere and lock ourselves in a room.”

“There was nothing around us for miles,” says guitarist Tim Brennan. “It was just us and the studio. I think it gave us the ability to work without distractions in a way that we’ve never really been able to before. All we could do was focus on music. It was one hundred percent devotion to the songs. Once we started to put everything together in El Paso, the songs took on a whole new life and exceeded our expectations.”

From the start of the songwriting process there was a sense of urgency and passion in the room. The opiate epidemic ravaging the country – in particular Boston and New England – was hitting closer than ever to home. Sadness, anger, and dismay fed the writing process. This was personal. The crisis directly struck the band’s family circle in 2014 when Barr’s brother-in-law died of an overdose.

“Between Al's loss and all the friends and people that I know, I'd say I’ve been to 50 wakes in the last three years,” Casey says. “The state has decided to almost give up on kids in a way with prescribing Suboxone, which is like the methadone of our generation. Of course, that doesn’t work either. You can’t give up on the people society has deemed will fail.”

One of the main focuses of the band’s Claddagh Fund is to support addiction recovery. The band is hands-on in raising funds, mentoring, and lending a helping hand in the fight. Many of the songs reflect these experiences. “Rebels With A Cause” was written about kids who are given up on and left behind by a system that has written them off as hopeless. “Paying My Way” is about the way up and out of addiction and the dream of bigger and better things in life.

But the first song that was on the docket for this record was the daunting cover of “You’ll Never Walk Alone,” the Rodgers and Hammerstein song made famous by Gerry and The Pacemakers. "I was leaving another overdose wake and the song came on in the car,” says Casey. “My music was on shuffle, and ‘You’ll Never Walk Alone’ randomly played. As I heard the chorus, ‘Walk on, walk on with hope in your heart and you'll never walk alone,’ it struck me how powerfully the song related to the struggle and how you don’t have to do it alone.”

With no fanfare, the members of Dropkick Murphys get into the lives of other people. With financial resources from The Claddagh Fund, they have helped many men, women, and teens who have found themselves in the depths of addiction. They stand with the families to help them navigate the life-altering road to recovery. It’s something Dropkick Murphys are dead serious about.

With all of this in mind, it’s fitting that 11 Short Stories Of Pain & Glory is a soundtrack to tragedy and triumph alike, and by the time these songs made it to tape in Texas there was a power to them unlike anything the band had captured before. On this album, Dropkick Murphys carry on the tradition of rough and tumble storytelling – the kind of writing that never leaves fans wondering whether the band have lived what they’re singing about.

A look back at childhood life, a snapshot of a clueless Masshole, a stop-you-in-your tracks reflection on a terrorist tragedy...it’s all there across the record’s 11 tracks. There are moments of ass-kicking Celtic punk attitude, ball-busting wisecracks, tear-jerking confessions, and the kind of upbeat words of wisdom that can be chanted loud and proud across arenas and stadiums worldwide. It’s real. It’s raw. It’s Dropkick Murphys.

The album begins with the band’s interpretation of classic Irish staple “The Lonesome Boatman.” Driven by a whistle and tribal drum that wouldn’t be out of place in The Good, The Bad, & The Ugly, the instrumental quickly ramps up with a gang chorus punctuated by gnashing guitars. “It’s got that loneliness of being out there in the desert outside El Paso, which sets the tone for the record,” says Casey. “Our version has that Southwest influence to it.”

11 Short Stories Of Pain & Glory quickly snaps into the anthemic, punked up clarion call of “Rebels With A Cause.” For the first time in years, Casey and lead singer Al Barr trade verses, painting a picture of “Dead end kids you don’t want ‘em // you don’t need ‘em // and you’ll always find a reason when you need to write ‘em off,” before announcing, “Kid--you got heart.

“Like the title says, this album is everything from pain to glory,” affirms Casey. “It’s the successes, the failures, the heartache, and the laughs. It’s like a chapter book, and each song is its own part of that story. They’re different feelings, moods, and emotions, but they’re still Dropkick Murphys.

“Blood” lands a one-two punch of traditional bagpipes and crunching riffs, culminating with the chant, “If you want blood // we’ll give you some.” Brennan goes on, “It’s old style Dropkicks, but the delivery has evolved. There’s a lot more space to it musically. We’re still doing what we’re known for doing, but in a more sonically expanded manner.” “Blood” is the story of the band’s 20-year career, and the mutual respect and dedication the band and its fans have for one another.

What started as a catchy piano melody developed into one of the more stirring songs on the album. Hinging on a bombastic drum loop, “Paying My Way” swings from a commanding piano riff into the powerful refrain, "But my hopes are so much higher // don't count me out I'm a survivor.” The song is as uplifting as it is undeniable.

“Paying My Way is not just about paying your bills,” says Casey. “It's about doing what you have to do in order to be a good person. But at the end of the day, never losing sight of the fact that doing the next right thing may lead to great things one day.”

“First Class Loser” calls out a lovable lout. “Before I play that song for people, I say it’s about them. Then they get pissed once they hear the words,” chuckles Casey.

11 Short Stories Of Pain & Glory seizes on idyllic summers of childhood mischief on “Sandlot,” a sun-drenched look back at youthful disobedience. The song developed on the road over the past few years. Even without a recording, fans at the biggest European festivals could be heard carrying the tune loudly on their own, sometimes drowning out the band as they played the acoustic version.

“4-15-13” stands out as one of the most emotional pieces in the group’s catalog. With its traditional instrumentation and somber folk-inspired elegy for their hometown’s innocence, the track pays homage to the victims of the Boston Marathon Bombing, most of whom the band grew to know personally after many visits to their hospital rooms in the aftermath.

“Since that day, we felt like not taking the challenge to write a song about what we all went through would be taking the coward’s way out,” Casey reflects. “We put more importance on writing that piece of music than anything we’ve ever done, because if you’re going to touch that day, it has to be done right. We went through so many emotions with that whole experience, as did everyone in Boston. It changed the city forever.”

11 Short Stories Of Pain & Glory represents a high-water mark for Dropkick Murphys as they invite listeners everywhere to once again take an active part in their story. “We’ve stayed true to what the band is and has always been. And we’re still expanding on our sound and lyrical content,” offers Brennan.

“There is lots of messed up stuff going on in the world but you can't let it take you down,” Casey continues. “The only way to survive in life is to enjoy it and make the most of it. That’s what this record is. There’s good times. There’s bad times. There’s happy times. There’s sad times. In just 40 minutes, you feel all of that. We truly put our heart and soul into every record we’ve ever made. This is no exception. We wouldn’t let it go down any other way. We’ll break up before that happens.”

11 Short Stories Of Pain & Glory is the perfect way to kick off another 20 years of Dropkick Murphys. Hold your head high, and crank it up.

Dropkick Murphys have become ambassadors for their city. In Boston, it seems like everybody knows someone connected to the band whether by blood, friendship, or the time they shared a brew at a Bruins game. They’ve built a legacy that does Beantown proud. Since their 1996 formation, they’ve sold a staggering 4 million albums worldwide with 2005’s The Warrior’s Code achieving an RIAA Gold certification and its smash single “I’m Shipping Up To Boston” nearing double platinum and appearing during a key moment of Martin Scorsese’s Academy Award-winning The Departed. Most recently, 2013’s Signed And Sealed In Blood netted their second consecutive Top 10 debut on the Billboard Top 200, and debuted at number 6 in Germany. The album spawned standout tracks “The Boys Are Back,” “Out Of Our Heads,” “Prisoner’s Song,” and “Rose Tattoo,” a fan favorite that has accumulated 24 million views on YouTube – without the aid of being a radio hit. A special version of this song featuring the band’s buddy Bruce Springsteen was released as a benefit for the Boston Marathon bombing victims. They’ve hosted sold out concerts at most of the city’s landmarks, including Fenway Park, TD Garden, the Boston Pops, and even the last voyage of the USS Constitution. They updated the Boston Red Sox anthem “Tessie” in 2004, which may or may not have had something to do with the team’s first World Series win in 86 years…

Discography
Do Or Die (1997, Hellcat/Epitaph)

On The Road With the Dropkick Murphys DVD (2004, Hellcat/Epitaph)

AmazonOfficial WebsiteFacebookYouTubeTwitter
*Service and handling fees are added to the price of each ticket.
Buy Tickets